Today’s interview is with Roberto Fung the kitman at Reading FC Women. Join us as Roberto shares his stories and experiences about being the kitman for a women’s team.

“I would say I was lucky with both, the women’s role started out as being asked to help out by Lee Herron who at the time was helping in the running of the team. Over time I took on more responsibility with washing the kit setting the kit out washing boots etc while working another job, only for around the past 4 years have I done it full time along side the academy job.

The Academy job I applied for when the job came up which was originally as minibus driver and academy kit co-ordinator which then turned into a full-time academy kit man position and have done both ever since.”

“It’s not what I originally set out to do I wanted to be an airline pilot but due to sight requirements at the time I could not do that.”

5. What are your responsibilities as a kitman?

6. Do you have a catchup with the opposing Kitman prior to or after kick-off?

“Yes, I will always try to speak to them prior to kick off normally before the teams arrive and sometimes after within the women’s games. Within the academy there is normally no time after as we are busty getting the changing room cleared and away as majority of games are in the evening.Its good way of seeing how different kitmen or women work and get a few ideas from how they doing things.”

8. Do you get any input on the club’s kit designs?

“I personally do not, our head kit manager along with retail and a select few do.”

9. Do you own any football shirts, if so, how many and what’s the most treasured shirt you own?

“I do have a few but not a lot. I treasure all shirts I have as I have them for different reasons so I can’t pick just one.”

“Sometimes if possible or its been pre-arranged prior to the game, within the women’s game no.” 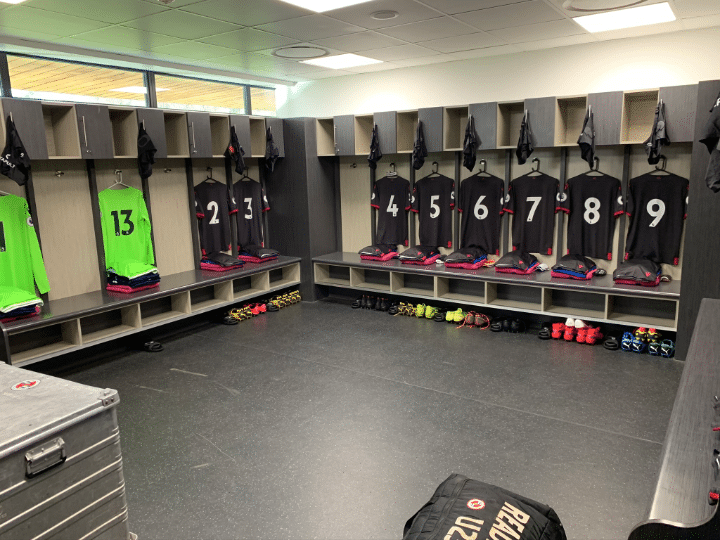 “There are far too many football kits through time to pick out just one!”

“Non-existent I played of my local Sunday team when I was younger but nothing serious. I played either left or right back have also had the occasional stint as goalkeeper.”

13. Have you made any errors like, forgot the kit or brought the wrong kit?

“I have but not many errors, but I always found a solution and rectified it by the team arrived at the ground.”

14. What happens to the kit at the end of the season?

“Providing we are with the same kit supplier we will keep it for a period of time should anything happen with the delivery of the next seasons kit. Players will take their match shirts and sometime shorts. Some bits of kit we can find a use for otherwise it gets boxed up and a charity called KitAid come and collect then distribute out to those less fortunate.”

15. What’s your proudest moments as a kitman?

As academy kit man it would have to be deputising for the 1st team assistant kitman.”

16. What characteristics do you need to be a kitman?

“Organized-makes the job a little bit easier. Good communication-so you know what the management team and players would like you to do and so also you know what the team is doing on that day if they need assistants with anything etc. Proactive-be prepared for any changes that could arise. Patients-this job dose require long hours at times. I would say these would be the main ones.”

17. What’s the funniest kit related story you can tell us that has happened to you or you have witnessed?

“I will not name the team but a few years back I was watching a women’s game on the tv on Facebook at the time when I noticed almost immediately that the away team was not wearing their teams normal kit. When the cameras got closer the away team was wearing the home teams away kit. After the game it was said the team forgot to travel with their playing kit. In fairness they did not have a kitman at the time as the kitman was not a common position in women’s teams as it is today.”

“We all do our own but depending on the wash that’s being put on it all goes together.”

19. Finally, why do you love being a kitman?

“Every day is different I enjoy coming to work and doing the job I do, the players and staff and fun to be around. You see what really happens in the changing rooms and behind what fans see on the pitch at the weekend or midweek game. I have also been fortunate to go to a few different places on tour with the team so been to America, Portugal and Spain.”

That’s to Roberto for taking part in the Q&A.