News from the English Premier League now as the new West Ham United 2018-19 Umbro third kit has been officially revealed this morning, confirming the previous leaked images on The Kitman.

Inspired by The Hammers first ever 3rd kit which was worn during the 1992-93 promotion winning season, the new West Ham Utd third shirt has a light grey base colour with diagonal claret and blue stripes running across each shoulder.

The trim on the collar is coloured claret as is the Umbro logo on the right breast. West Ham’s badge on the left breast has a blue outline whilst the crosses Hammers and wording are coloured claret.

Betway have their name in the centre of the football shirt coloured black.

A subtle classic double diamond pattern appears on the cuffs. 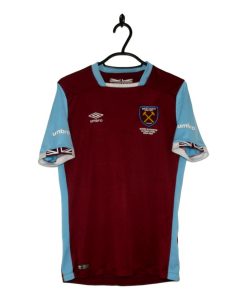