Our latest interview is with Scottish Championship side Dunfermline Athletic’s kitman Mo Hutton. Join us as Mo gives us an in-depth behind the scenes look at what it takes to be a kitman in professional football. 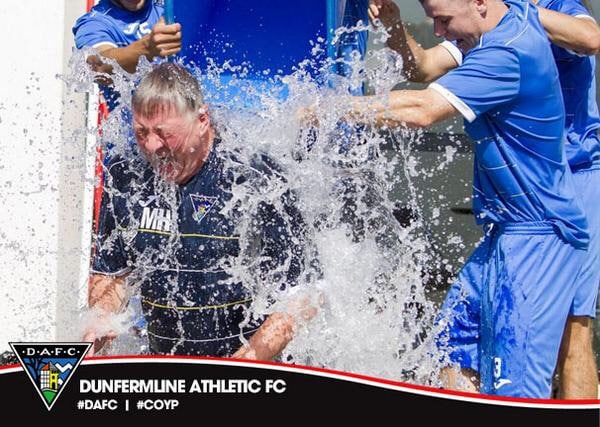 Who are you Kitman for and how long have you been in the role?

Have been at the club since 1993 was involved with youth development till 2000 then took over as kitman.”

I was assisting him up till then.”

So we had teams from 11yrs up to 18 yrs playing kits training kits coaches kits organising pitches transport and such like so was doing kit at lower level but good to watch young players develop.”

“Never really set out to be kitman it all happend very quickly Joe’s wife fell ill just before preseason was going to start. Dunfermline got a new manager so things were up in the air a bit.

Dunfermline are full time so needed some to coordinate training kit for staff and players and as I was doing that job for the youths went to help out initially did both for a year then went to work full time with the seniors.”

“It’s a big job! You start planning the November before next season giving designs and asking your kit supplier for new ideas for home and away kits as we have a new strip every year some clubs run with strips for two seasons we don’t.

Then January / February start picking training kit for next season.

Then you have give quantities of each item and sizes baring in mind the turnover of players and staff at the end of each season.

This year each player and staff member will get kit wise for training and travel wear:

Then kit order for match days warm up kits

For first team and reserves

Then name plates for players that you know are staying you know what size they are for kits.

Numbers for strips and shorts to go with the new kits logos for league badges.

Logos for training kits and match warmup and strips and shorts all these names numbers and logos have to be printed on as well.”

“Yes we all talk to each other in our league now a directive is sent to the SPFL on Tuesdays, if your home team or away I would phone the opposition kitman if they were at home to see what his preference is before submitting colours the reason for this sometimes goalkeepers are creatures of habit like the same as much as possible so if you can get his favours colour in great keeps him sweet.”

“Most players in the first team want that tight fit so I just size everybody. I also keep a list so after he picks his size I keep a record so we can go back if he thinks I’ve got it wrong. Experience tells me to keep notes of every item you give them another reason for the list is so when you hand kit items out you can tell them if they come and say oh no you never gave such and such ie the list.”

“Yip if I see nice tops with our colours al take photo.

At Dafc we try and take the strip colours out of the club badge my favourite has always been white background with thin black candy stripes down.”

“I used to collect a lot of tops when we went on preseason tours abroad or down south but we have tough times with administration so money had been tight. The most treasured, we were lucky enough to play Manchester United in a testimonial game for our long serving captain at the time Scott Thomson I managed to get Wayne Rooney’s top which I gave to my son and have got Scott’s top from that game as well.”

“Not really if I need tops from other clubs for charities I contact who ever and they sort it we kind of look after each other that way.”

“Sorry let it out the bag earlier.

“Never played at senior level but had a few trials. Played junior 1 level below for ten years various clubs.”

What happens with the kit at the end of the season?

“Every player gets one home and away top and shorts if they want them. Sponsors get the other ones. With the youths and reserves I try and print one with their sqaud number and name on as a keep sake. We usually keep 2 sets to start away next season as some times we have games before they launch new kits.”

“Never done that. Always speak to other kit men before 1st team games.

Can sometimes be a problem when you play Rangers or Celtic reserves as they just turn up with the same goalkeeper kits as you. I learned very quickly always carry two colours with you and have passed that on to the girl who now assists me sometimes.”

“We were in Scottish Cup Final v Celtic FC at Hampden Park Stadium. The team were on looking at the pitch an hour and a half before the game a group of stewerds came over to me, they do a lot of big games there and they told me our lads were the smartest team they had seen for ages! We wore Adidas kit that day, very smart we got beat one nil 89 minute crap goal, was on my way in to get extra water for extra time.”

“Well you have to be able to take a bit banter but give it as well. Be strong, never let them run over the top of you. I’ve found some of the best players and biggest names always look after you because they know how it works, the kitman is involved with everthing that goes on.

You also need to be agony aunt when things are not going well for individual players and staff.

Must be organised for every event.”

So both teams were in the tunnel ready to come out. The ref comes back in says there will be a delay there’s something on the pitch so i decided to sort a challenge out! Both teams drop their shorts to show their birthday suits! Everybody just burst out laughing even the referee!”

On match days I will stay on and get as much done before I go home if it’s a home game and come in the next morning to finish off.

Away games back to stadium and put washing on we have 4 top loaders 2 smaller below for whites etc then I just go home catch up next day at home have been known to do a bit but my wife Helen does most of it.”

“It keeps you feeling younger, mixing with all the young players, good craic everyday! Used to be manager here, Dick Campbell my best pal, he would always say time for work and play! Most of my friends are in the professional game so we all mix and enjoy life help each other through the tough time’s.

Also Dunfermline Athletic have been to a few countries since I became kitman:

I would have loved to emulate the team from the sixties who were prolific at that time as a young boy I would watch this team.”

Mo would also like a special mention for Ian Kirk and Sammi Connell who help him do his job. Keep up the good work guys!

Think that’s our favourite interview to date! Thank you so much for taking part Mo.