Today’s interview is with Paul Carter the kitman at Sky Bet Championship club Cardiff City as well as the Wales U21 National team.

Join us as Paul shares his experiences and stories about being a kitman in professional football.

“Hi my name is Paul Carter and I am the Kit and Equipment Manager for Cardiff City Football Club and I have been at Cardiff for 3 1/2 years. I have also worked for Wales Men’s U21 National team for the last year.”

“I came to Cardiff in 2016 from Stoke City I was Assistant Kit Manager there and the opportunity came up for a progression in my career and I felt it was the right time and right club for me so I went for it and thankfully was successful.”

“I have previous experience as I just mentioned at Stoke City I worked there for 5 years as assistant kit manager and was lucky enough to work in the premier league for my time there and also had a season in the Europa league which again was a great experience. Previous to that I worked at Birmingham City Football Club as assistant first team kit man for 3 years so in total just over 11 years working in professional football.”

“I always had an admiration for working and like most kids had a dream of playing football for a living but i realised very early on that wasn’t going to happen so I started looking at other routes to be able to work in football, i started off in coaching and obtaining my level 1 and 2 and also took a sports therapy course on while at college.

I was able to do some voluntary work at Birmingham for a year or so during the holidays whilst at college and help out at home games, I finished my second year at college and luckily for me a job became vacant at Birmingham and I was offered a full time position working alongside the first team kit man which I took and haven’t really looked back since then.”

“I’m sure most kit men will tell you that this can be a very a long list but in the main my job daily alongside my kit team is to ensure the players and staff have all the kit and equipment they require to be able to train. So that will be ensuring all kit is laid out daily, assist the coaching staff with preparation for training make sure they have all the equipment they need including balls, bibs, cones, poles, mannequins etc.

As you can imagine there many other roles which a kit man Is required to undertake but just to name one other role, as we get towards a match day then the preparation for that will start 2/3 days if not more in advance including packing the match and warm up kit, printing the match shirts, boots, trainers, flip flops, medical and sports science equipment we don’t travel very light and we carry a fair bit of kit and equipment. Anything the staff or players require for the match day we will take to ensure they have everything they need to prepare properly.”

“Yes we will always try and have a catch up with the opposing kit man, we all do the same jobs whatever team we work for and is always nice to share ideas and have a general chat/catchup. Home team kit men will always try to make the away kit team feel at home by offering food and drink to keep them going and then no matter the result catch each other before they leave and wish them all the best for the rest of the season. We will also keep in touch throughout the season on what’s app and social media and if anyone needed anything you know at phone calls notice we will help each other out if possible.”

“Some players have various superstitions that they follow and will ask for some random bits of kit at times but we are here to make them feel as comfortable as possible and know that everything will be in place for them to prepare for the match. I must admit I have never had any out of the ordinary requests but if it’s possible to do and player wants it and makes them prepare correctly I would make it happen.”

“I don’t get an input in the match kit too much this is done via our kit supplier/ retail team but i have a say in the training kit colours and range of kit we supply the players and staff. Just in case people are not aware the match and training kit is ordered 10 months in advance so we order our kit in the August for a May/June delivery the following year and the match shirts are decided sometimes 2 years in advance to allow production time because as a club we order a huge amount of stock and our supplier is not just supplying Cardiff they have many other teams.”

“I do have a selection of shirts I have collected over the years, I was involved in the winning Carling Cup final team at Birmingham City in 2011 so I have one of the embroidered cup final shirts signed by the whole squad, this one is very special to me as I was a fan growing up as a kid so to be involved in that day was extra special for me so having that brings back some great memories. I also have a Stoke City shirt which I was given when I left personalised signed witn message of support and of abuse by all the players and staff so this is also very special to me. Both of these shirts are framed and on the wall in my house.”

“I personally try to get shirts from players I have worked with previously and now at different teams and have them signed by them.”

“My playing career wasn’t of any note I played Sunday league, school boy football and college football, I still play when I can for fun but not at any high standard. I am a right back / sweeper when I do play.”

“I haven’t had any major errors thankfully but I must say this can easily be done when we are taking so much kit and equipment but thankfully my checklists and double/triple checking has worked well so far touch wood. On away trips especially this is always something you never relax with until everything is out and the dressing room is prepared. We will normally always travel overnight for away games so when possible we will go to the stadium Friday night and get all the kit into the changing room for 4th/5th check we have everything and allow the boots to dry from the mornings training.”

What happens to the kit at the end of the season?

“At the end of the season once we have received  the new lot of kit for the next season we normally donate a lot of kit to a charity called Kit Aid who distribute around Africa in particular and out to good use. We will recycle and use some kit for the following season for various reasons but in the main bulk of the training / match kit is donated to charity.”

“I think the proudest moment for any kit man would be once the game kick offs and everyone has everything they needed for the game.”

“I would say the most important characteristics you need is being organised, prepared to be first in and last out the work is never done. I would say one of the biggest traits you need to have is preparing for every eventuality and be able to react to any number of scenarios trying to foresee any problem/ question that could arise and covering that base. Dedication goes without saying but taking pride in your work and never get complacent.”

“In football which one of the reasons I love working in the environment is the banter and daily atmosphere is great place to be.

One story that is funny now but wasn’t at the time would be… We was on pre season tour in America with Stoke we had an internal flight from Orlando to Philadelphia all the kit went on the plane with the normal baggage, we landed in Philadelphia and as we disembarked the plane there was huge power cut in the airport we had 50 kit bags and 45 personal bags the airport was in chaos people from loads of flights all demanding there baggage and no light or electricity. We decided to send all the players and staff off to the hotel and we would collect everyone’s baggage so myself and couple other members of staff stayed behind hut the baggage was being pulled through the carousel and name just being shouted out but all the kit bags were under my colleagues name so over the course of an hour the same name was shouted out 50 odd times much to the amusement of the locals who found it very amusing who couldn’t understand why someone would bring so much baggage on holiday. We got an applause every time my colleagues name was shouted out, as I said very stressful at the time collecting close on to 100 bags but when you look back was quite funny.

“Well it’s actually a bit of both myself and my partner Clare do it but I do take my job home and make sure the clothes are all folded correctly and my wardrobe and draws are very organised!” 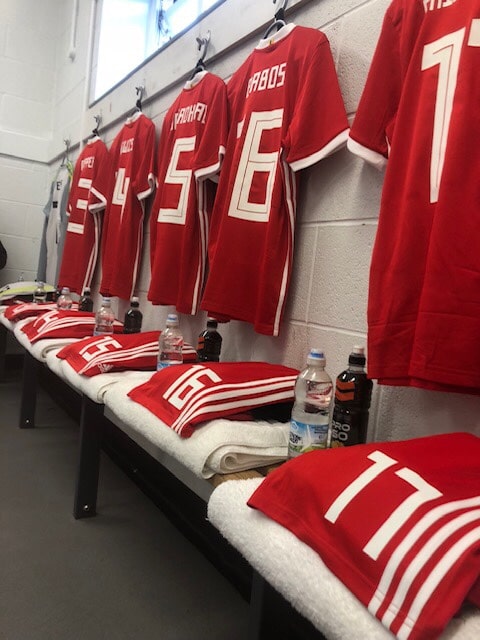 “I love my job because I get to work with and meet some great people and sometimes see a different side to people which is not always published which is refreshing, but I also enjoy the weekly planning and build up and then we arrive at the ground all the dressing room is set up and you can’t beat the winning feeling come 90 minutes back in the dressing room the atmosphere is electric and then we do it all again maybe Tuesday or the following week.”

Many Thanks to Paul for answering our questions and giving us an insight into what it takes to be a kitman.